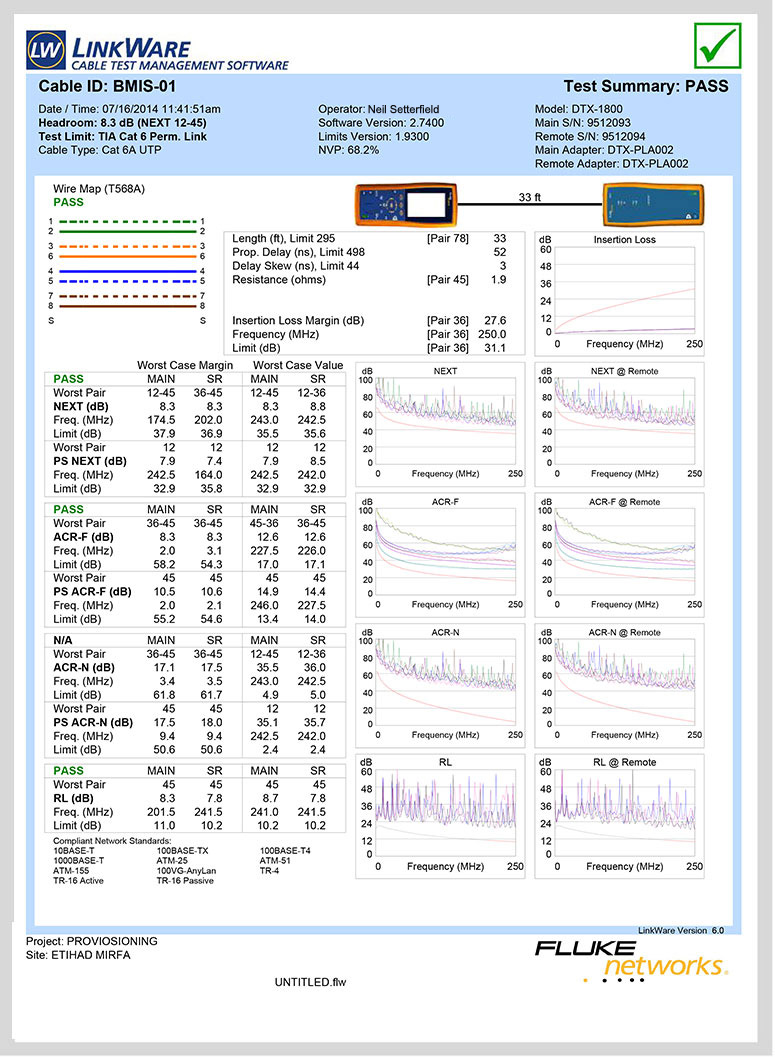 If you are an Installer who has carried out a Cat 5e, Cat 6 or Cat 7 installation which requires certification, then CSA Midlands are able to provide a solution.

You may be required to certify your installation to provide a warranty or to simply prove to your client that their new infrastructure is capable of handling certain applications that will be run over other network.

We can carry out a complete test of your network using a specialised Level III tester. Each link would be tested in accordance with Telecommunications Industry Association (TIA) or International Organization for Standardisation (ISO) standards. This would allow us to rubber stamp your installation, certifying  that it has been installed and tested to the current standards.

Each of the following tests are performed when carrying out a Level III test.

The wiremap test is used to identify physical errors of the installation; proper pin termination at each end, shorts between any two or more wires, continuity to the remote end, split pairs, crossed pairs, reversed pairs, and any other mis-wiring.

The Propagation Delay test tests for the time it takes for the signal to be sent from one end and received by the other end.

The Delay Skew test tests for the difference in propagation delay between the fastest and slowest set of wire pairs. An ideal skew is between 25 and 50 nanoseconds over a 100-meter cable. The lower this skew the better; less than 25 ns is excellent, but 45 to 50 ns is marginal. (100 meters in a cable electromagnetic wave passes behind 334ns)

The Cable Length test verifies that the copper cable from the transmitter to receiver does not exceed the maximum recommended distance of 100 meters in a 10BASE-T/100BASE-TX/1000BASE-T network.

Insertion loss, also referred to as attenuation, refers to the loss of signal strength at the far end of a line compared to the signal that was introduced into the line. This loss is due to the electrical impedance of the copper cable, the loss of energy through the cable insulation and the impedance caused by the connectors. Insertion loss is usually expressed in decibels dB with a minus sign. Insertion loss increases with distance and frequency. For every 3 dB of loss, signal power is reduced by a factor of 2  and signal amplitude is reduced by a factor of 2.

Return Loss is the measurement (in dB) of the amount of signal that is reflected back toward the transmitter. The reflection of the signal is caused by the variations of impedance in the connectors and cable and is usually attributed to a poorly terminated wire. The greater the variation in impedance, the greater the return loss reading. If 3 pairs of wire pass by a substantial amount, but the 4 pair barely passes, it usually is an indication of a bad crimp or bad connection at the RJ45 plug. Return loss is usually not significant in the loss of a signal, but rather signal jitter.

Near-End Crosstalk (NEXT) is an error condition that describes the occurrence of a signal from one wire pair radiating to and interfering with the signal of another wire pair. It is the difference in amplitude (in dB) between a transmitted signal and the crosstalk received on other cable pairs at the same end of the cabling. Higher NEXT values correspond to better cabling performance. A higher value is desirable as it would indicate that the power transmitted is greater in magnitude than the power induced onto another wire pair given that the NEXT measurement is simply a difference calculation. NEXT must be measured from each pair to each other pair in twisted pair cabling and from each end of the connection. NEXT is measured 30 meters (about 98 feet) from the injector / generator. Higher near end crosstalk values correspond to higher overall circuit performance. Low NEXT values on a UTP LAN that will be using an older signaling standard (IEEE 802.3i and earlier) are particularly detrimental. It could be an indication of improper termination.

Power Sum NEXT (NEXT) is the sum of NEXT values from 3 wire pairs as they affect the other wire pair. The combined effect of NEXT can be very detrimental to the signal.

The Equal-Level Far-End Crosstalk (ELFEXT) test measures Far-End Crosstalk (FEXT). FEXT is very similar to NEXT, but happens at the receiver side of the connection. Due to attenuation on the line, the signal causing the crosstalk diminishes as it gets further away from the transmitter. Because of this, FEXT is usually less detrimental to a signal than NEXT, but still important nonetheless. Recently the designation was changed from ELFEXT to ACR-F (far end ACR).

Power Sum ELFEXT (PSELFEXT) is the sum of FEXT values from 3 wire pairs as they affect the other wire pair, minus the insertion loss of the channel. Recently the designation was changed from PSELFEXT to PSACR-F (far end ACR).

Attenuation-to-Crosstalk ratio (ACR) is the difference between the signal attenuation produced NEXT and is measured in decibels (dB). The ACR indicates how much stronger the attenuated signal is than the crosstalk at the destination (receiving) end of a communications circuit. The ACR figure must be at least several decibels for proper performance. If the ACR is not large enough, errors will be frequent. In many cases, even a small improvement in ACR can cause a dramatic reduction in the bit error rate. Sometimes it may be necessary to switch from un-shielded twisted pair (UTP) cable to shielded twisted pair (STP) in order to increase the ACR.

Power Sum ACR (PSACR) done in the same way as ACR, but using the PSNEXT value in the calculation rather than NEXT.

DC Loop Resistance measures the total resistance through one wire pair looped at one end of the connection. This will increase with the length of the cable. DC resistance usually has less effect on a signal than insertion loss, but plays a major role if power over Ethernet is required. Also measured in ohms as the characteristic impedance of the cable, which is independent of the cable length.

Lack of testing putting IT infrastructures at risk